To Dance with the White Dog

Aunt Martha was in the final stages of cancer. What was a cancerous lump in her breast had invaded other parts of her body and the doctors had sent her home to die. My mother sent  a Care Package including the Hallmark Film based on Georgia author, Terry Kay’s book To Dance with the White Dog. My family had read the book and adored the film. Martha was a dog lover and her sweet beagle, Maxine was always by her side. She and Uncle Danny watched the film together on one of her last nights at home before going back into the hospital where she took her final breath.  Our last conversation was about the film. My family surrounded as we watched her go. It changed me forever. It was the month of May.

We had moved out to the country from the cozy cottage in the quite little town where I was born. I was 16 and sad. Her loss was so painful, it was almost unbearable. We had all been robbed. Meanwhile I am trying to finish high school, taking courses at Emmanuel College and have just left the only home I ever knew to move out to our farm in the middle of no where, also known as Reed Creek. I stumbled through life, vulnerable, afraid, and still so horribly sad. I didn’t want to move, I didn’t want to grow up and I didn’t want to lose my dear aunt Martha.

I was seated at the dining room table reading the big fat Sunday version of the Atlanta Journal Constitution. It was September 12th, 1994 and Jessica Tandy had died. The female lead in To Dance with the White Dog. In the story, an elderly man, Sam, has just lost his wife of 57 years. The White Dog appears when only he can see her and becomes his companion. His children think he is growing old and senile, and even the reader doesn’t know if the dog is real or an apparition. But Sam and the White Dog dance through the remainder of Sam’s life. The film had starred Tandy and her real life husband Hume Cronyn who played Sam. Their romance was real on screen and the couple left a lasting impression. After his wife had died, feeble Sam would step out into the yard with his aluminum walker and the white dog would appear and jump with paws on the walker and join Sam in a dance. The article was all about their romance and her life and the film, To Dance with the White Dog. I read the article through tears. Aunt Martha would never grow old with her soul mate. She left me too. She was my biggest fan in life. I could do no wrong in her eyes. She loved me extravagantly. I missed her unconditional love deeply.  As I sat at our lace covered dining room table and read I heard a knock at the back door. It was Dad, dressed in his Corps of Engineer’s Smokey the Bear uniform. He motioned for me to come outside. Ever the skeptic, I kept asking him what was the matter, what was he doing home at this hour from work, and why must I come outdoors. He wasn’t allowed to just come home during working hours and was still in a pale green government issued business only Corps of Engineer’s truck. He opened the passenger door to reveal a dog, a white one. Exactly like the one in the Hallmark Movie and Mr. Kay’s book. He had the sweetest face and was white and fluffy and gentle. He poured out of the truck on a rope leash, fragile and afraid. I had a dog.

Naturally, we named him White Dog and he went wherever I went on our new farm. If you ever sat down he insisted on coming behind you and pressing his head under your arm for an embrace. He rarely barked. He was eerily quite. He would often run in front of you, turn round and raise a paw for a handshake. Dad had found him wandering around a campsite, no collar, malnourished and knew we needed him and he needed us. White Dog, like most pets, instinctively knew when I had had a bad day or something was wrong. Even on days when I didn’t know we needed it, he was there to cheer us up, greet us, welcome us home and be our constant companion.

At the time, I didn’t attribute his surreal arrival as a gift from God. The God of my world was a taker and not to be trusted. But as I have walked through life, twenty years later, I see His hand so obvious and so evident. His gaze never turned from my pain and He knew my loss. He sent me another fan, a four-legged one, but one who was always there, who loved to put his paws in my hands and dance. Martha's loss in my life is still real but so is His goodness and His constant attention to detail. 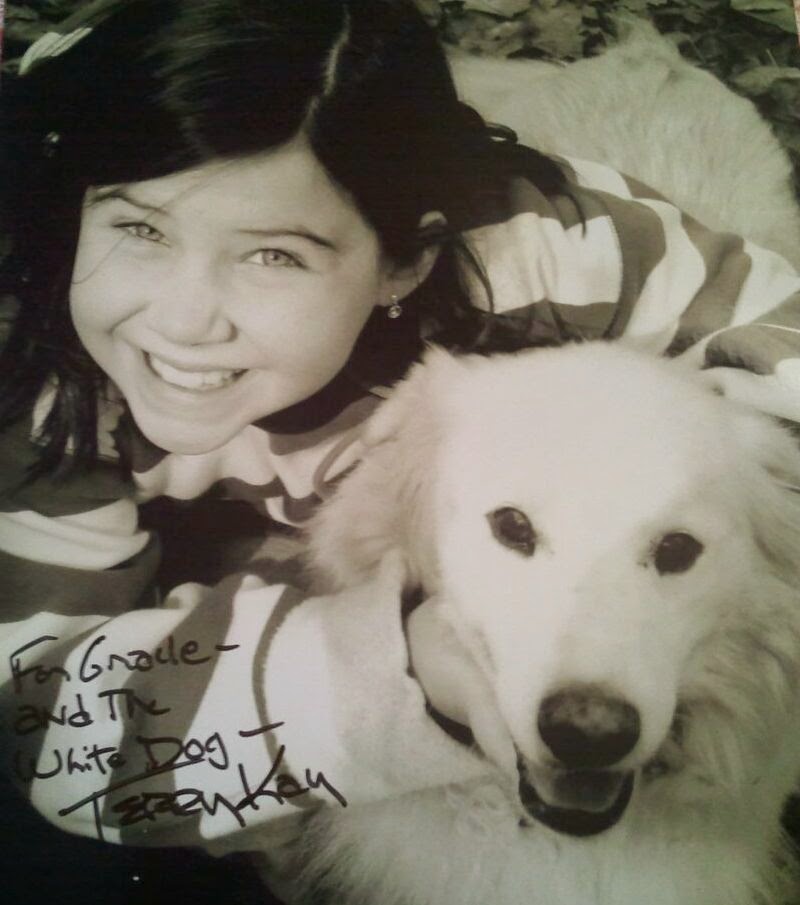