Memphis has been on the short list of things to do while living in Tennessee. I have passed through on the way to Arkansas twice, but fell asleep both times. I wasn’t driving. I didn't really do my research as well as I should have on all the things to see and do and embarrassingly, I am not a huge Elvis fan. He died 15 days after I was born and that was all I ever really knew of him. Except for those movies he did when he was cute. I wanted to go to Memphis because I had seen Hustle & Flow. And Garden & Gun said their food was good. So when W’s niece invited us to attend the Chiari 5K walk in Southhaven, we drove west. 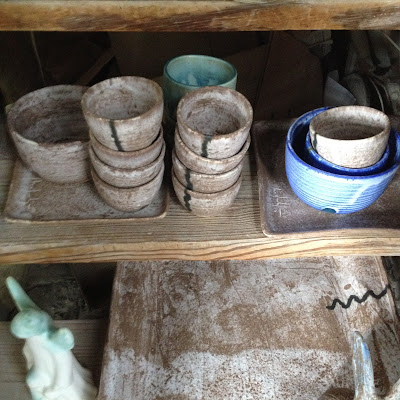 We spent our first day driving further west to McCarty Pottery. I will forever be sold out to Lake Hartwell Pottery artist Lynne Burke. Her cups and bowls in my cupboards feel like love on a shelf and love in my hands. But W insisted we go get some of this stuff since it was made with Mississippi mud. McCarty is a big deal to Mississippi folk. I recently went to a dinner party where a lady had hers prominently displayed. Apparently, McCarty’s first pieces were made from clay dug from dirt owned by Faulkner himself. The pieces are made distinct by a squiggle representing the Mississippi. They are molded in beautiful hues of brown and blue and true tones of the Delta and every true Southerner should own a piece and now I do. Sadly, McCarty died just a week before we arrived. 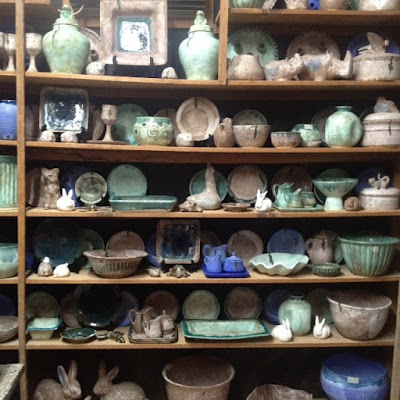 The next morning, I got to see real Memphis. We started with breakfast at Bryant’s Breakfast. Bryant’s is apparently on the edge of the sketchy Hustle & Flow side of town. I had been told stories about Memphis, that it was rough, white people were not to go to certain parts, racial tension was a problem, but I have lived years in rural Mozambique and I do not understand this great divide. But when a black guy with long corn rows pulled up to Bryant’s Breakfast in a low rider beat up Lexus, slammed the door and set the alarm in one smooth motion and swaggered in wearing a black t-shirt with a pistol on the front with large lettering that read, Welcome to Memphis Duck Mother F@#$%!, I started to get the idea. This wasn’t Africa, this was Memphis. And Bryant’s Breakfast has a cheese and egg biscuit that is pretty incredible. Now that I think about it it was one of the only places I recall dining with blacks and whites. Horrible, I know. So go there for that reason alone, and you won’t leave hungry or disappointed.

We also dined at Bounty on Broad. All menu items are brought to the table and served family style. They are located in a newly renovated brick building in a revitalized art district. It remains far from cozy and is too industrial for my design taste and everything was cooked in loads of pork fat which doesn’t appeal to my vegetarian tastes either, but you might like it.

Andrew Michael Italian Kitchen was a much better experience and I hear their sister restaurant, Hog & Hominy, across the street is equally incredible. Andrew Michael is a small space, small rooms with wooden floors, white linen tablecloths and softer than soft lighting. Remember Seeger’s in Atlanta? A little like that but it smelled like Italian sausage. They have very little on the menu for vegetarians but we are used to that. I got the off-the-menu chef’s choice vegetable plate. It was wonderful, flavorful acidic tomatoes, incredible grits. We split the Chocolate Sticky Toffee Pudding with brown butter pecan powder and salted caramel ice gelato three ways. Hands down the best value for $2.3333 in the State of Tennessee.

The highlight of the trip was the Civil Rights Museum located downtown. As much as a picture of Grace under a Graceland sign would have made a killer Facebook profile picture it didn’t make the cut. The Civil Rights Museum is one of the best museums I have ever toured. It is incredibly well done. It takes you on a journey starting from slavery through the assignation of Martin Luther King, Jr. to the investigation behind the assignation. It is all made incredibly real as you stand at the sight of his death at the Lorraine Motel. It is brilliantly done. No documentary or textbook or lecture can teach you what you experience as you go through the exhibits. I never knew how the entire world mourned his loss and just how tragic his death was and the timing of it and perhaps where we could possibly be as a nation had he lived. One person. Would Memphis look entirely different now? Would we have reach the ideals of his dream for our nation by 2015? I know that as I entered the museum and saw men crouched in the hull of the slave ship and heard the sounds of men coughing and retching, I could never begin to know what their lives were like. When I lived in rural Mozambique and stood on Ibo Island where thousands of slaves were forced on ships by evil white men I wondered how this could have ever happened and begged forgiveness. It is hard to stand on that soil as a white person and not. 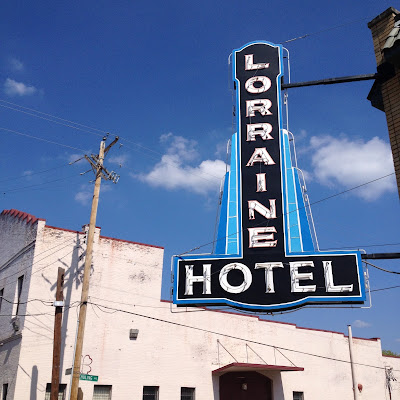 And because of this and that dessert at Andrew Michael Italian Kitchen you should go to Memphis.

PS. They also have a Pottery Barn Outlet there.
Posted by Grace Davis at 6:29 PM No comments: Links to this post